I know it’s been a while since I’ve posted a blog but first thing’s first: My debut novel THE BETRAYED (released back in March 2017) has officially made Brian Keene’s Top 15 Books of 2017 list!  Since I started writing over ten years ago I wanted to make this list.  Keene is more or less the reason I wanted to write, and to be added to a year’s top list that includes works from Victor LaValle, Christopher Golden, Ronald Malfi, Maurice Broaddus, and the other, better Southard, Nate, along with my current peers like Somer Canon, Matt Hayward, and the Sisters of Slaughter, it’s an absolute honor.  Here’s what he had to say:

“First-time novelists often wear their influences on their sleeve. In some cases, this can lead to unfortunate pastiche. In more talented hands, it can lead to energetic and engaging stories that take that nostalgia and make something new.

“THE BETRAYED is definitely a case of the latter. A novel out of time, perhaps, and one that could have easily found a proud home in the Eighties horror section alongside Graham Masterton and Richard Laymon. Indeed, there’s no denying either of those authors (as well as perhaps Bentley little’s) influence on Wesley Southard, but THE BETRAYED never strays into pastiche territory. Instead, it builds on what has come before it, and what follows is a fine example of New Pulp that will appeal to fans of Bryan Smith, J.F. Gonzalez, and Gord Rollo.

“THE BETRAYED is a wonderful blue-collar horror novel — a brutal, riveting funhouse ride that is over all-too-quickly and will leave the reader wanting more.”

Again, I am truely blown away.  The e-book is still only $0.99, but not for much longer.  The price will go up by the end of the month, so get it now while it’s still dirt cheap.

Secondly, I am in the process of writing my first novella which I’m calling ONE FOR THE ROAD.  My goal is to hit twenty thousand words and at this moment I am a little over halfway done.  It’s a project I started many years ago, something that was sparked by my past as a musician, and unlike writing THE BETRAYED I’m having a blast writing it.  Not to belittle my novel, but it was a absolute grind to produce.  This novella on the other hand has been a joy to write.  I hope to have the first draft done by the end of the month, and the following few drafts just after.  As of this moment, I’m making this my Scares That Care Weekend 2018 release (along with possibly something else, we’ll see…).  I cant wait to see what you all think!

Speaking of Scares That Care Weekend 2018, I will be back again in Virginia t sell books and read and who knows what else.  It takes place between August 3rd-5th in Williamsburg.   I had a blast last year and I can’t wait for year’s.

Speaking of signings, there may be another in the works.  Now that I’m officially a Pennsylvanian (God, that still sounds so weird to me), I’m surrounded my many of my author friends, several of which are up-and-comers like myself.  We’re looking to do something locally.  Nothing solid yet, but I’ll let you know when and where it happens. 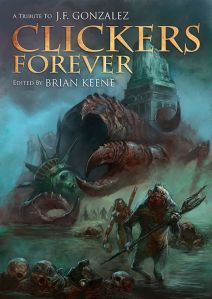 Early next month will see the Thunderstorm Books hardcover release of CLICKERS FOREVER: A TRIBUTE TO J.F. GONZALEZ, which includes my PRIMITIVE based story “For You, Anything”.  I absolutely cannot wait to see this book in person, and if the signature sheets were any indication of what to expect, we’re all in for a big treat.  And though the limited edition is long sold out, sometime this summer Deadite Press will be producing an affordable trade paperback for all to enjoy.

(Man, I can’t get over how killer that cover artwork is.)

And that’s about it for now.  There might be a few short story releases on the horizon.  We’ll see.  But at this point I’m open for whatever 2018 has to offer.  I hope to have another novella/novelette done by Scares That Care Weekend (not sure yet what the word count will be on this one, or the title for that matter).  I would also like to finish enough short stories to put together a collection, as well as starting novel number two.

I’m at a new chapter in my life.  I’m surrounded by the support of my peers, and for the first time in a long time I feel inspired to create and ready to climb the next rung of the ladder.